A very satisfying day! What a difference a rotovator has made to the allotment. 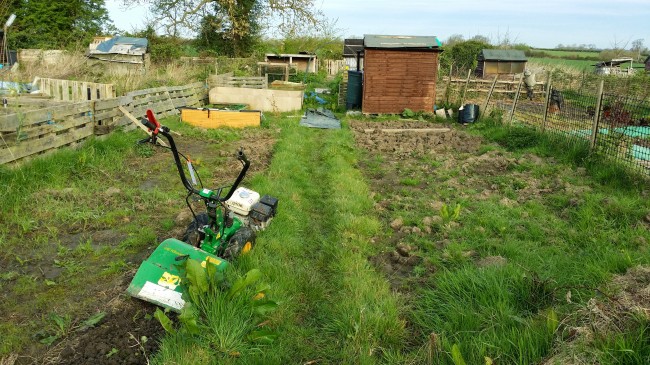 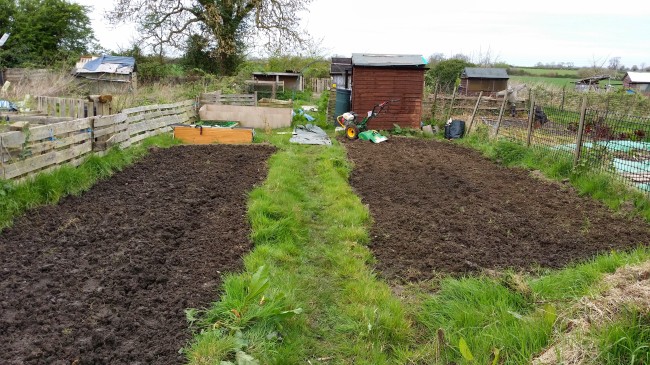 The rotovator was a Kilworth Ferrari 320 from JB Plant Hire in Hinckley. The rotovator was ace. Although it seemed slow to start, it was actually really speedy, covering the ground in about an hour. The tines went down about a spade depth and it managed to climb the mounds like a mountain goat, nothing stopped it!  JB were brilliant also. Dropping it off at just before 8am and they came back to collect it at short notice at about 10:30am.

The left-hand bed, and the part of the right hand bed that were flooded are still very wet, but I think that is because the water compressed the soil. I think that now it’s been opened up, it’ll dry out quickly enough.

So, I’ve now planted some shallots, and the rhubarb. The asparagus arrived today, just in time to be planted and I put another six bags of compost on top.  Now the fun begins! 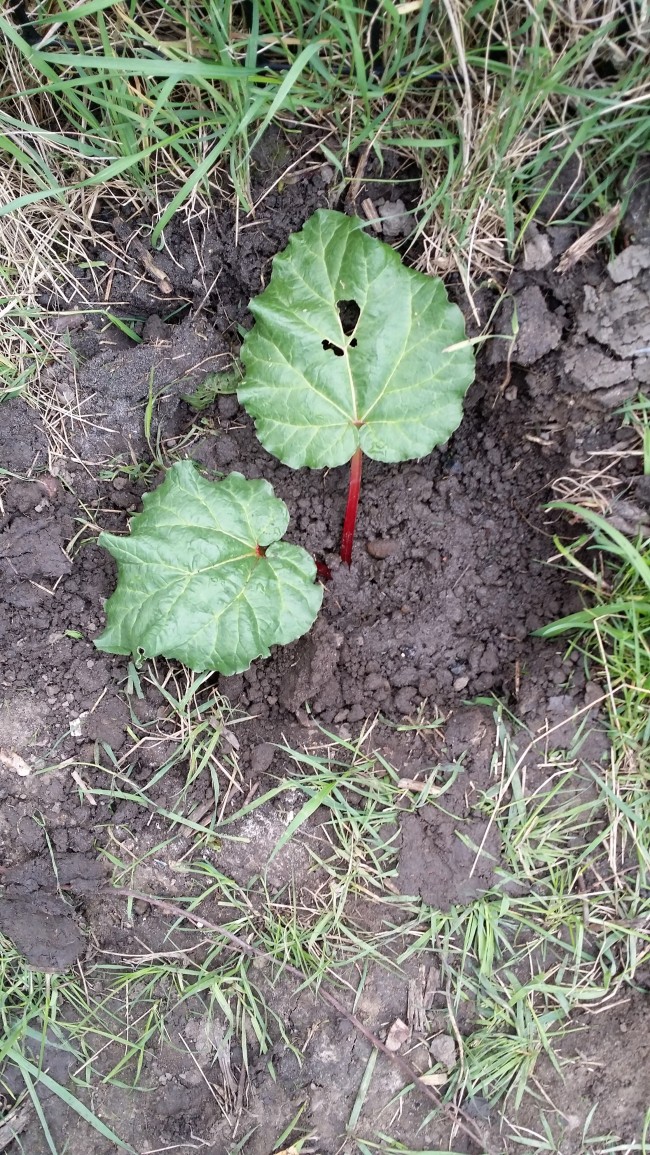 A quick return to the allotment for Elizabeth to sow seeds in her raised bed.She’s put in two varieties of carrot, cress, lettuce, a salad mix and she has left some space for some strawberry plants. She was great, really working hard on getting the seeds in the right place and even writing her own markers out.

She helped me put a few asparagus crowns in that we got from the garden centre, but we’ve got quite a few more coming this week so we left quite a bit of space!

One mistake I did make was to get the wrong net for the top of the raised bed. This one is too large. 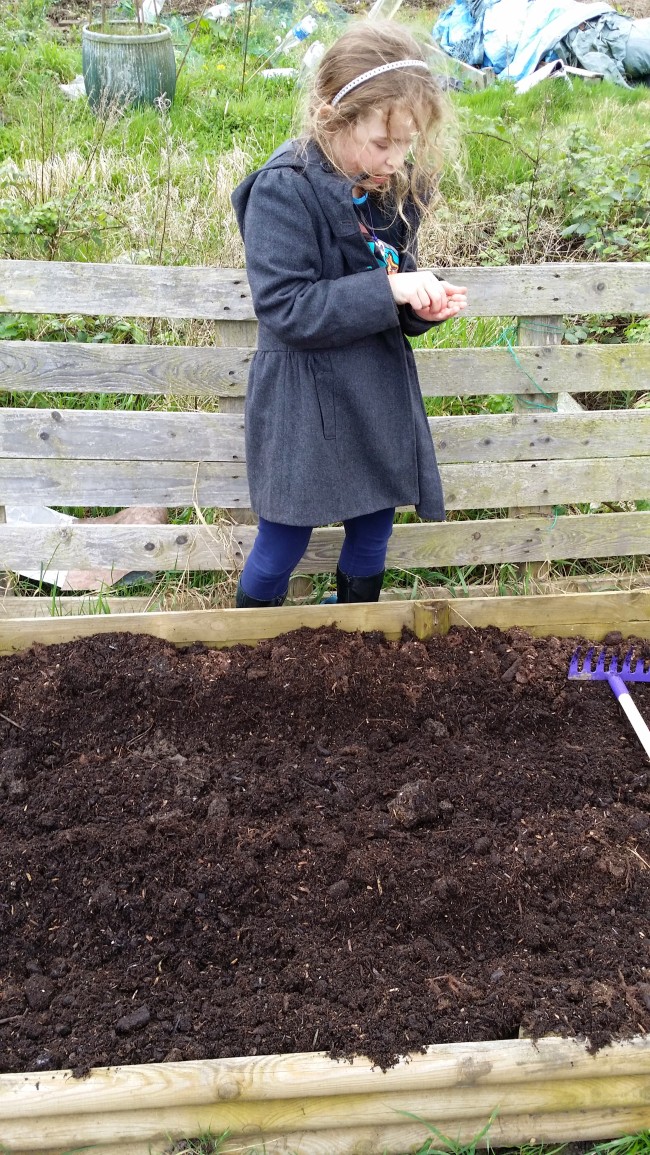 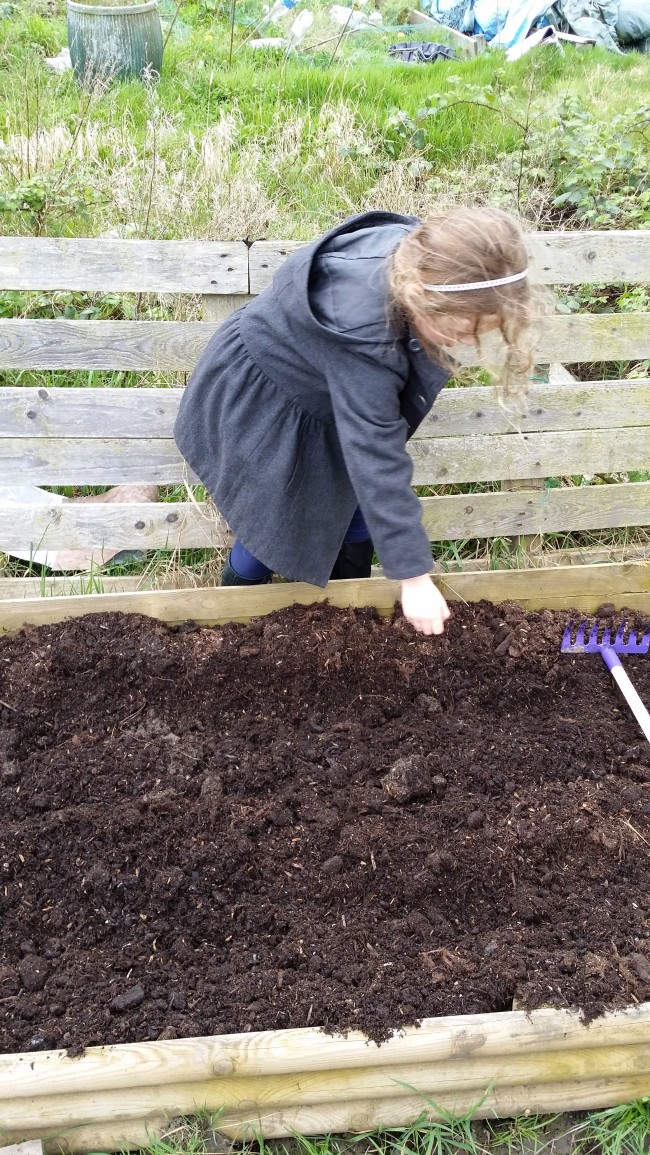 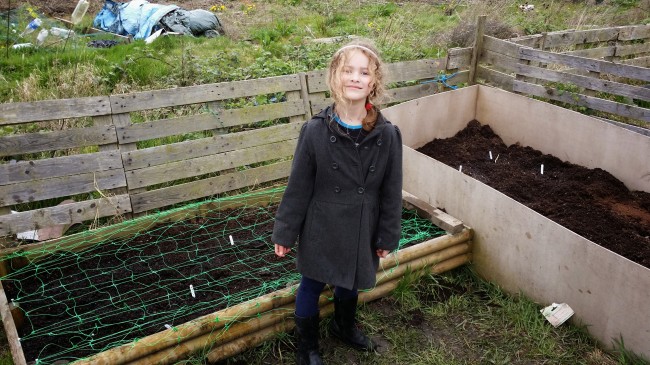 Today I abandoned Jet, Elizabeth and her friend Lily and I went to the garden centre to get all of the bits I needed to finish of my asparagus raised bed. 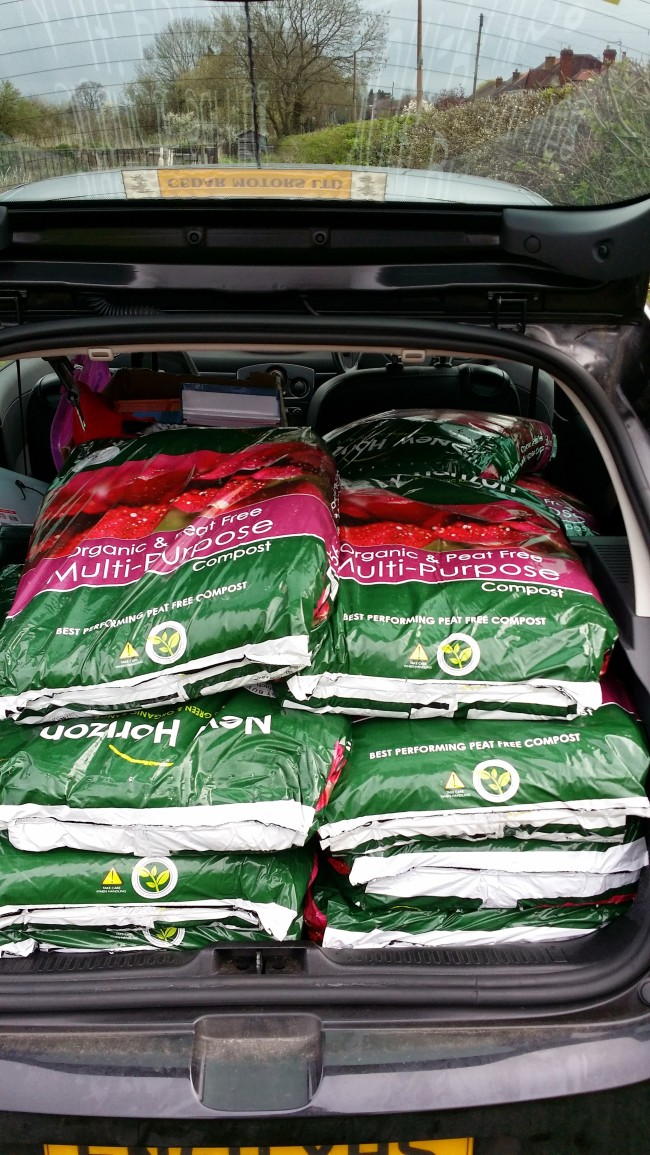 The bed is huge, about 8ft x 4ft x 3ft. I started by digging out all of the weeds that were in there: 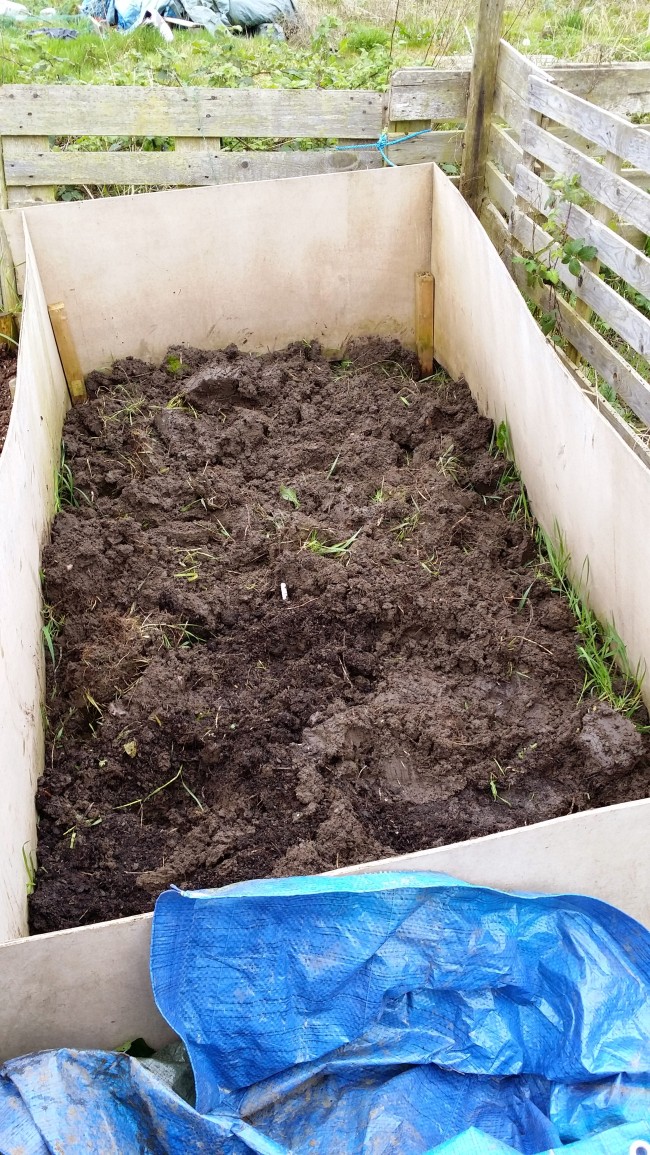 Then I added 60 kg of horticultural sand and dug that in lightly: 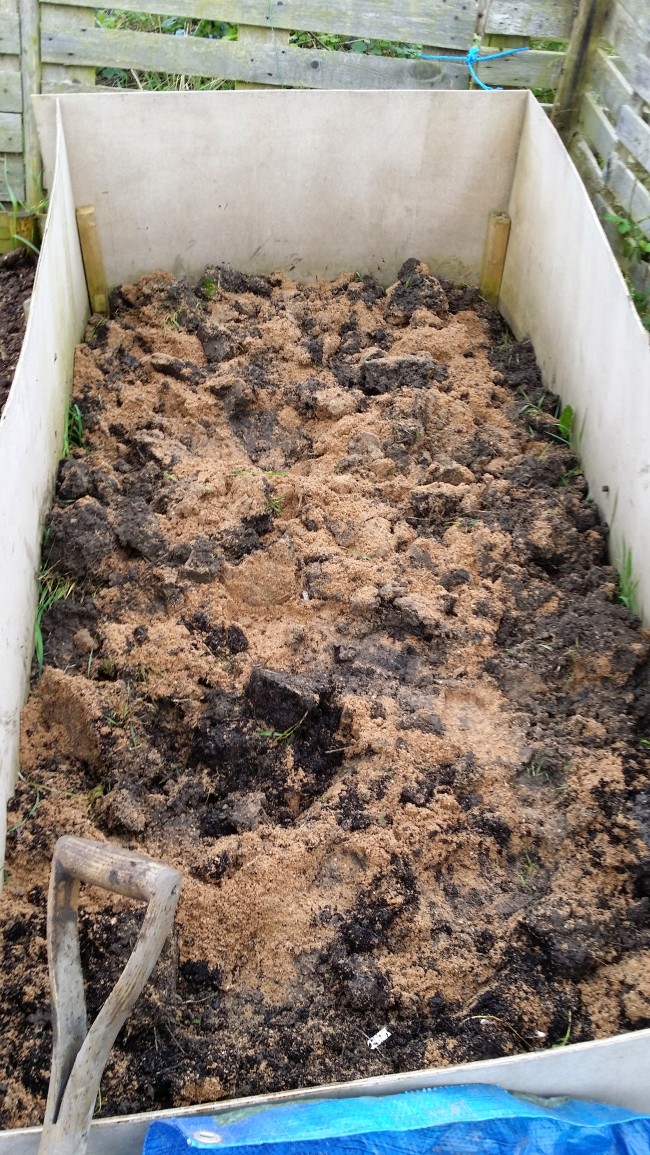 Then added six large bags of manure, about 330 litres of the stuff: 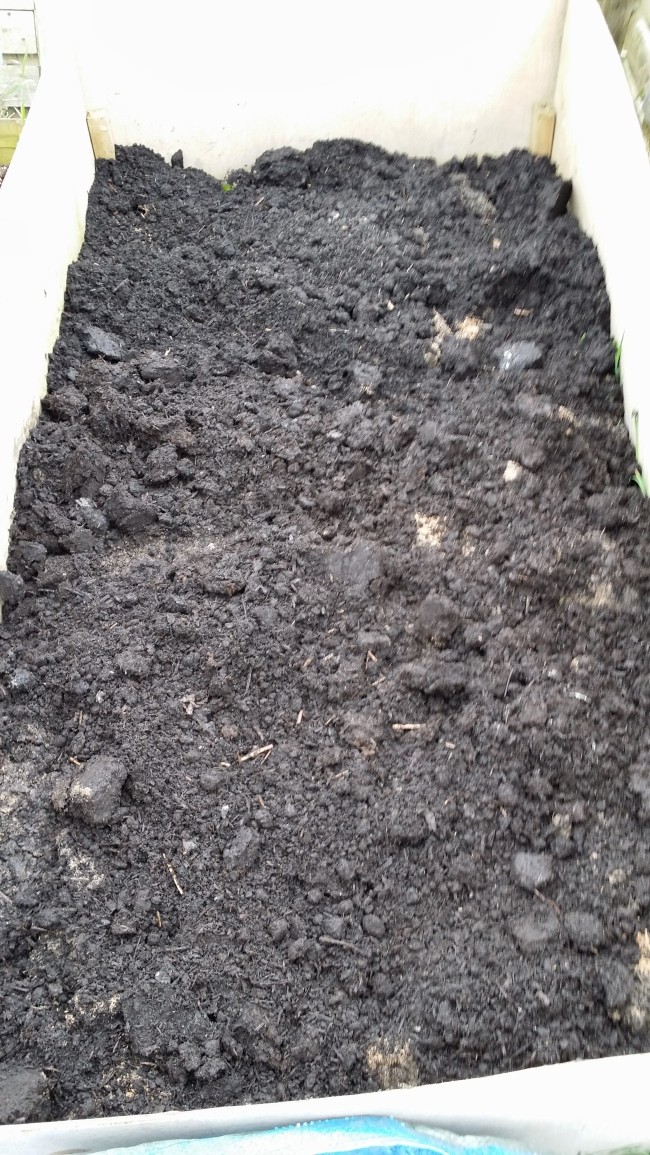 Then twelve large bags of compost, about 650 litres. 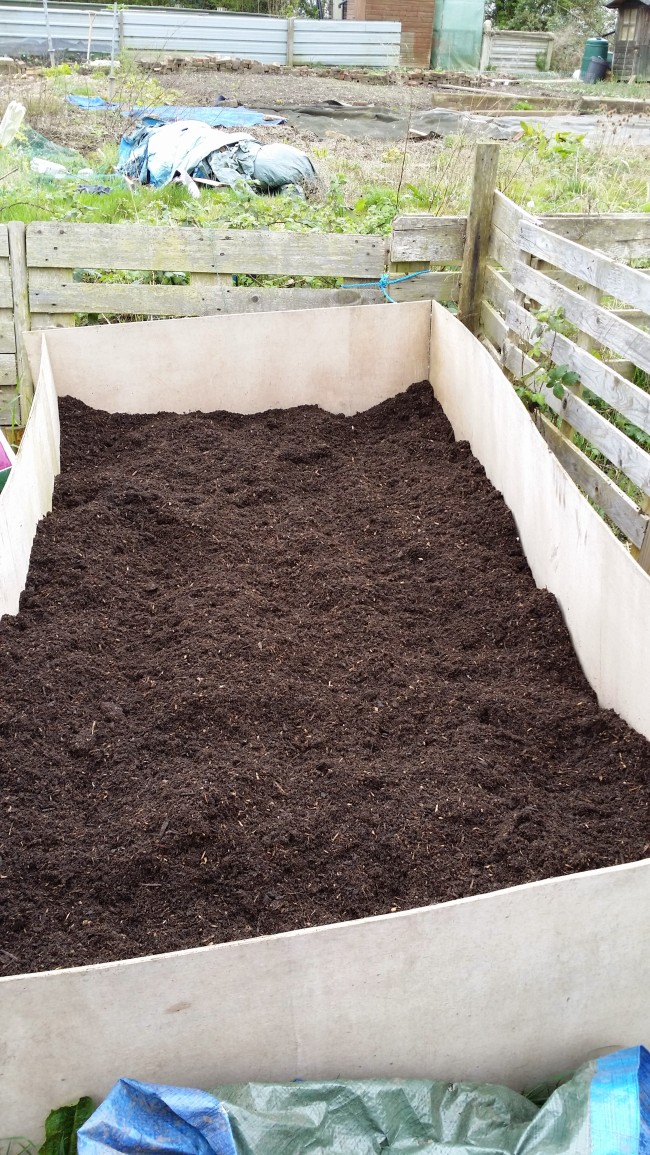 I had a little bit more compost left over, so I then put some potatoes in two potato planters. 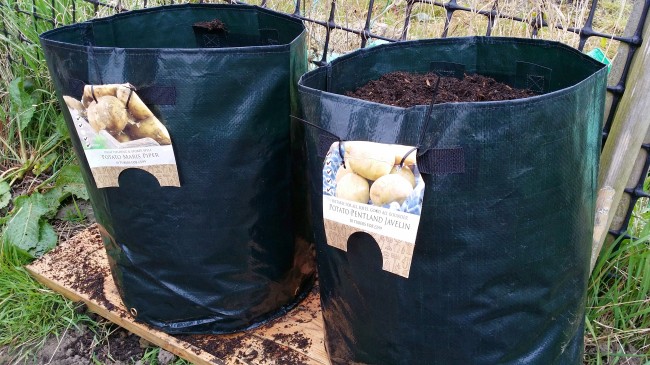 And finally was very happy to see some of the seeds coming through from last time: 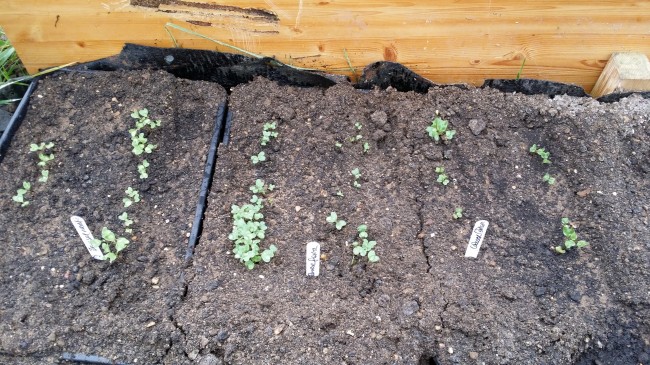 And the blueberry bushes are flowering! 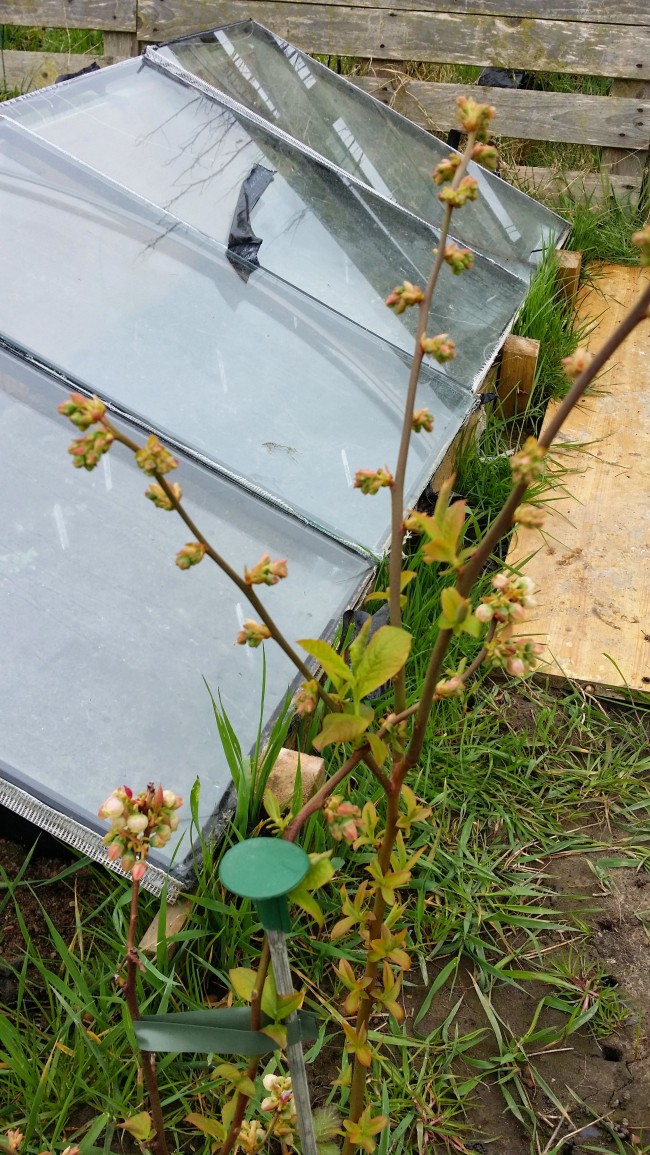 Not bad for a couple of hours work!  Next week I have a rotovator coming, so I’ll dig over the whole plot and get planting.  The asparagus crowns should be with me this week, so they can go in and Elizabeth’s raised bed is also ready for her to start on planting… Isn’t spring ace?! 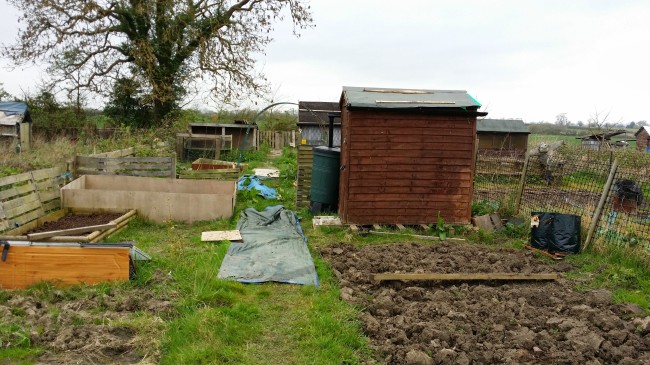 Today is the first day that I’ve been able to get down to the allotment and not drown. So whilst Jet and Elizabeth were sensible and went to watch a film, I went to see what damage the wind and rain had caused over the winter. 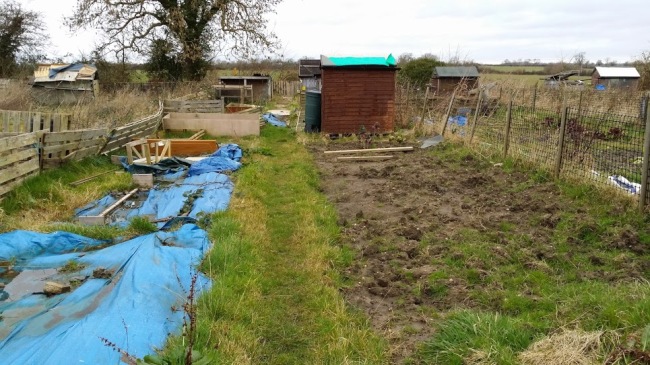 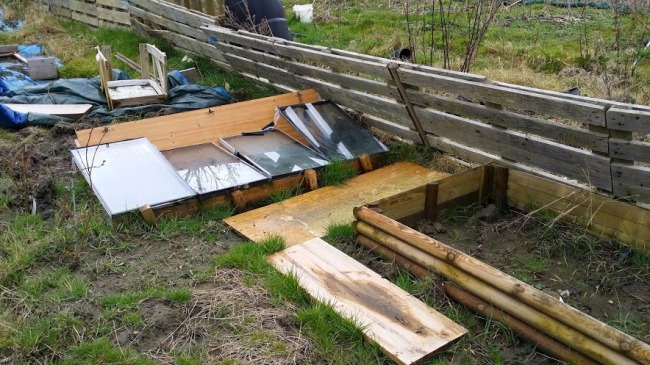 At first glance, it was pretty bad. The wind had taken the felt off the shed roof, the fence was falling down, and the cold frame I’d constructed last year had come apart. However, all of this was rectified within an hour, with a new felt roof, repositioning of the fence and the cold frame just needed a helping hammer.  The even better news is that the raised beds are still standing, and now ready for the compost to go in. 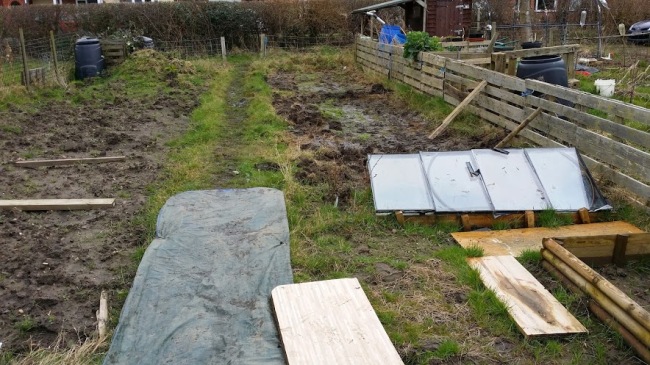 The rain has been quite destructive though. Most of the allotment has been under water, you can see how much the soil has compacted and you can also see small air bubbles where the air has tried to escape. The onions I put in the ground in November haven’t made it and the sprouts didn’t really get past sprouting stage. On the bright side, there aren’t so many weeds as I’d feared, and as soon as the water goes I can get to start on aerating the soil and then planting.

The huge amount of water has also helped to try and rot down all of the weeds that were under the groundsheets that I put down when I took on the allotment. There was very little green under there, only a little bit between the two sheets and a funky curtain of grass over the top of one of them.  I’ve taken the sheets off, cleared out the brambles and it means I now have a huge space to plant in this year.

One other piece of good news, the blueberry bushes we planted last year have survived and are budding 🙂 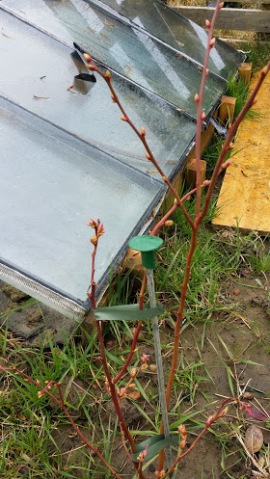 This is what the allotment looks like now, I just need to sort out what I’m going to plant! 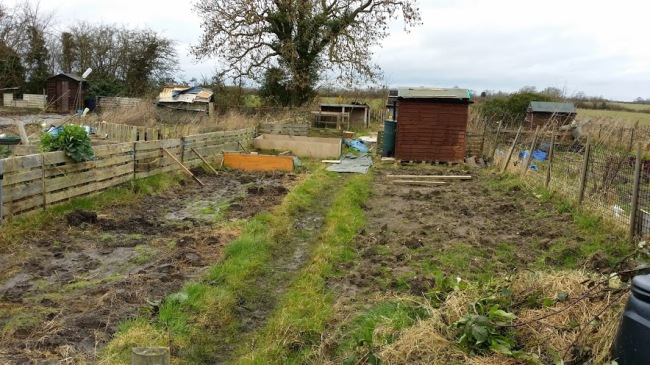 A long day at the allotment. Elizabeth and I went down this morning, she to weed, me to put up two raised beds. Elizabeth did plenty of weeding until the dog that belongs to the next door neighbour arrived and then she played.

I spent about four hours digging and putting up the beds and one cloche. The small one is for Elizabeth, the large ones is for asparagus. We also picked two Zuchetta Tromba D’Albenga (I have no idea what to do with them) and some tomatoes.

Photos below… but the first is the great news that I finished digging one side of the allotment last week, but was too tired to post! 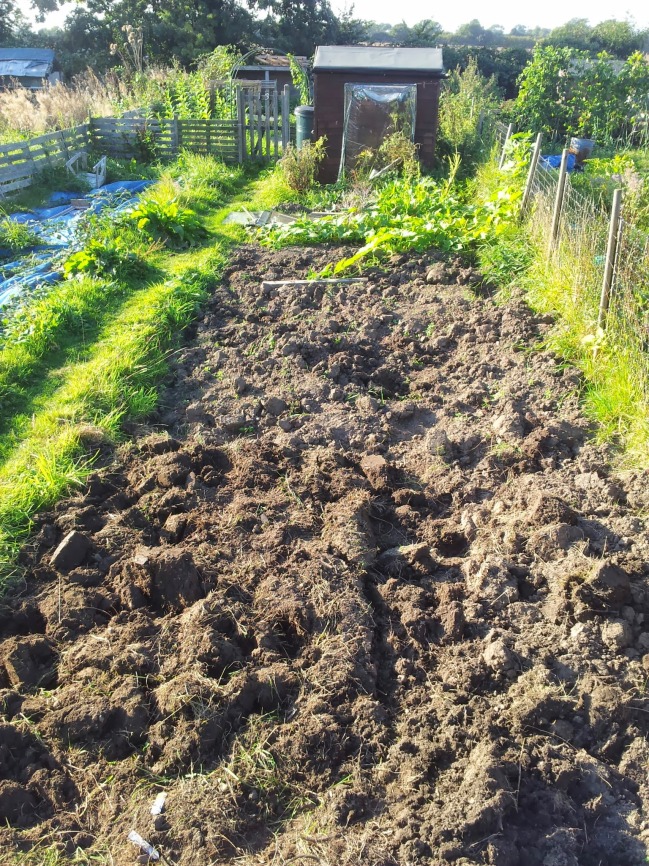 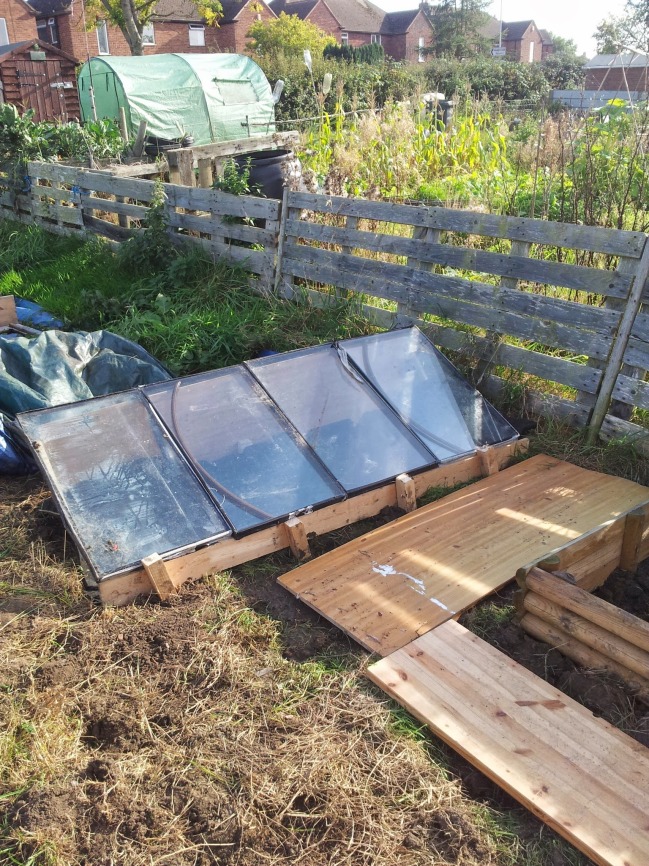 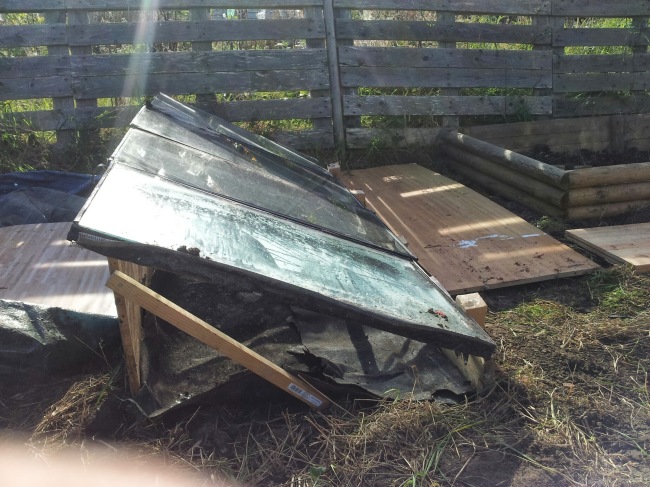 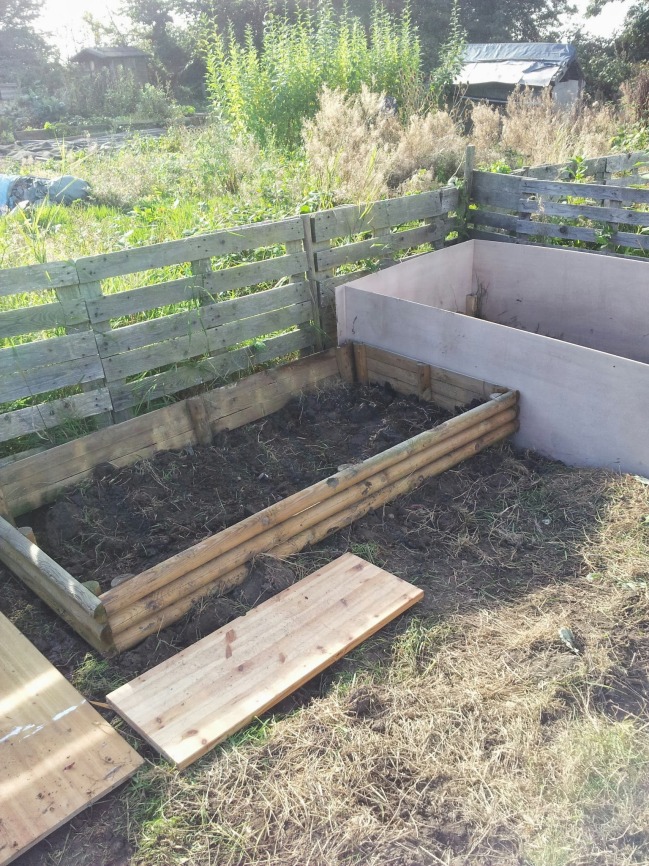 Bong… All carrots and scallions harvested 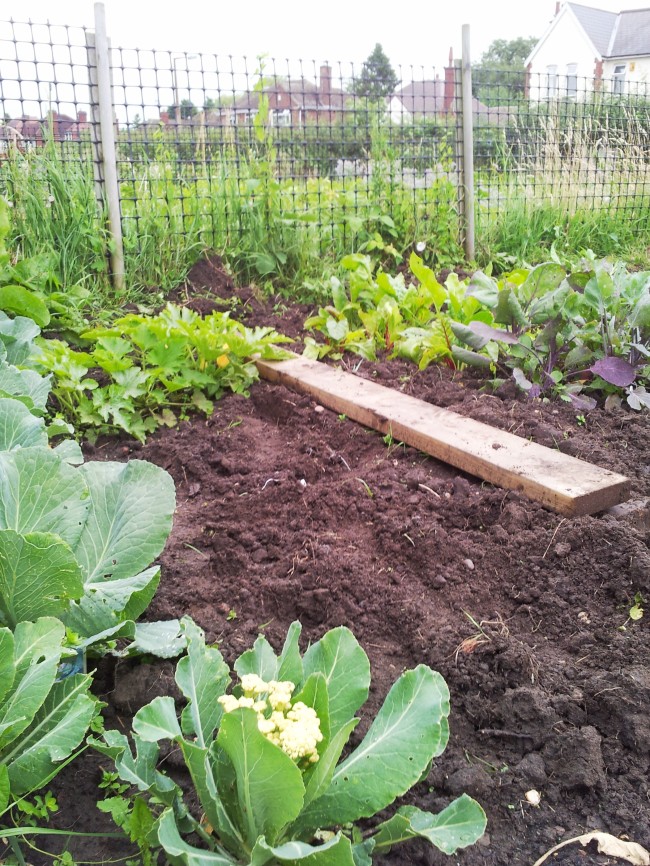 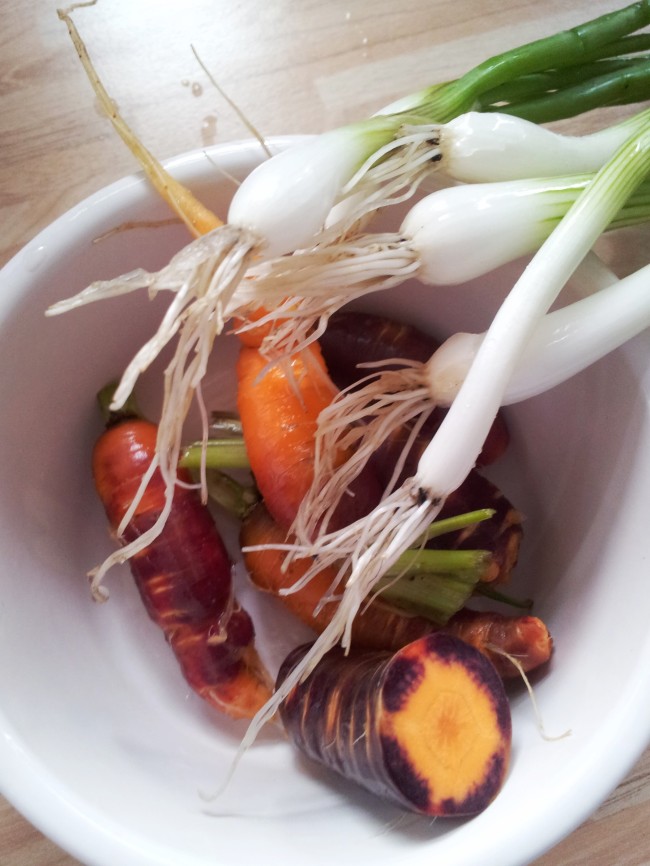 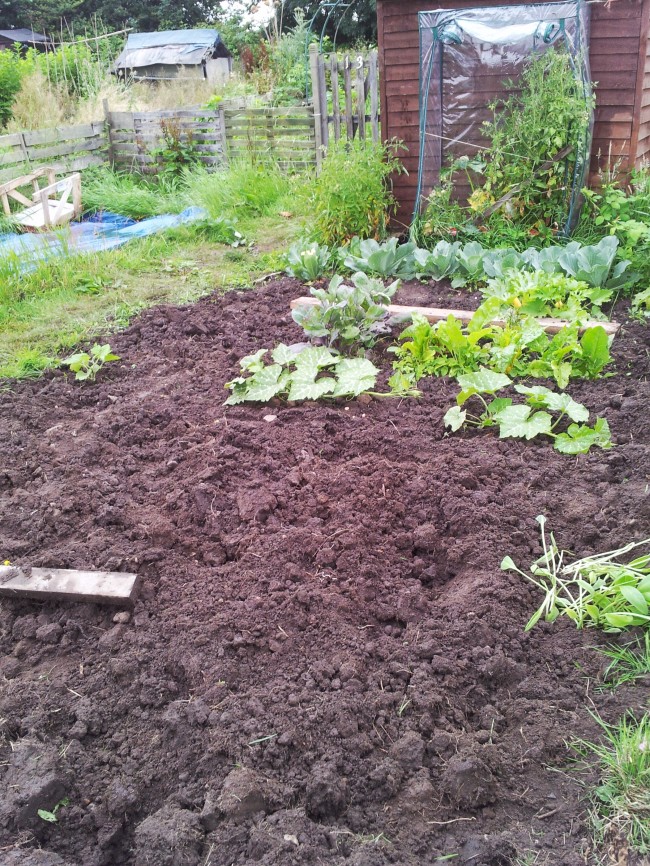 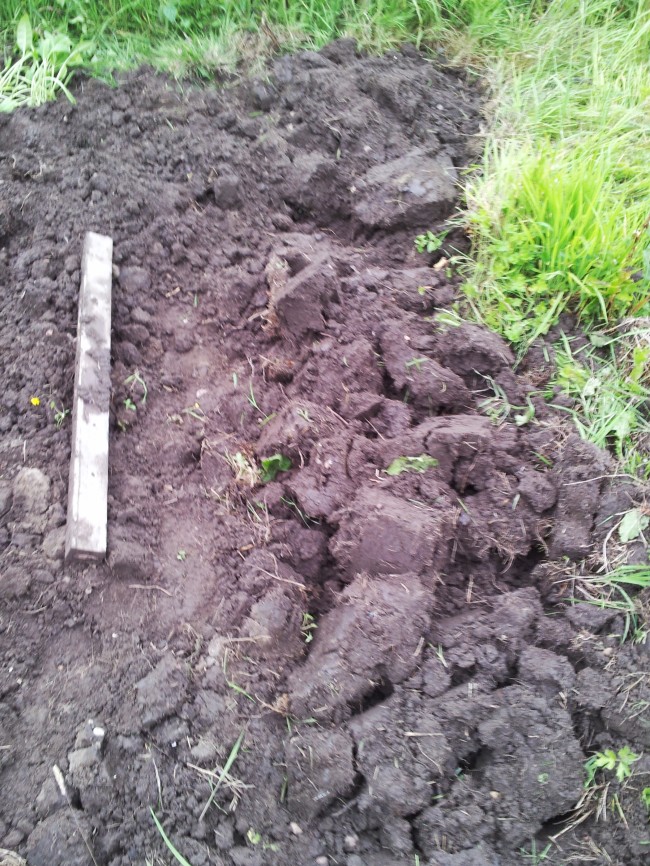 I have four tomato plants, all of them are growing tomatoes (for that is their job, if they were growing lego bricks I’d be concerned (actually, I’d sell them)). They aren’t growing just a few tomatoes, they are each growing many many tomatoes. (I’d say many hundreds but I can’t really be bothered to count them, so I prefer the ambiguous “many many”.)

I’d like to say that this is the result of my green fingers but the truth be known it is likely going to be a mixture of the weather and my parents (for I was away for ten days of their formative life – not my parents formative life, the tomatoes. This is getting complicated).

My question is…what do I do with hundreds of tomatoes?

PS. Apologies for the lack of photo. I couldn’t get the tomato plant to sign a model release form. Selfish.

Stuff I waffle on about

chrisrat's blog
Create a free website or blog at WordPress.com.